This years "Dark Side of Oz" will be a historic virtual class... join us for "Variations From The Dark Side" August 25th 8-9pm+ streaming live to youtube @ www.youtube.com/viralmediaart

NO PERFORMANCE THIS YEAR.

VOICES ON THE DUB SIDE OF THE MOON

DARK SIDE OF THE RAINBOW

for over a decade.

Originally founded by Michael Johnston aka Arkiver after the DSOTR sync was discovered 1995.

The noted recording Engineer recalls the studio process and the not so possible DSOTM connection.

THE DARK SIDE OF THE RAINBOW

After the 2 years of screening "The Dark Side of the Rainbow" on The Mystic Theatre's 30'x50' screen for staff and friends, I realized that in order to go further with this urban legend, I would have to reveal all of the synchornistic elements in the only way that I saw possible, make a fully edited live version. After apx 9 months of editing and experimenting the long road led me to the key that unlocked this mother of all syncs, now appropriately named "The Dark Side of Oz." I performed the 1st master sync in 2 parts for free to a very receptive audience on August 12th 2009. I wanted to pay tribute to the Grand Opening of "The Wizard of Oz" at the Oconomawoc Theater in Wisconsin August 12th 1939.

This was the 1st live screening, possibly ever to displayed all of the dialog and effects from TWOZ interwoven into the music of Pink Floyd's DSOTM.

SOMEWHERE OVER THE WALL 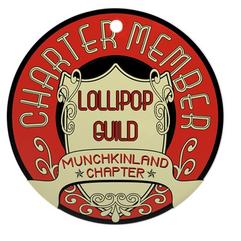 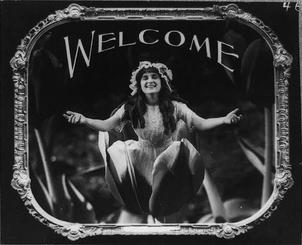 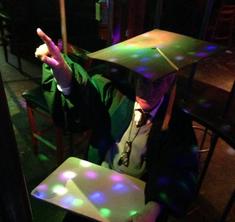 WIZARD OF OZ BACK STORY

The Smithsonian Channel - "The Origins of Oz" 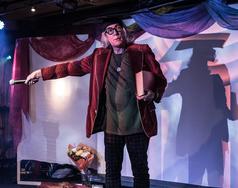 postponed until August of 2021

THE DARK SIDE OF OZ

FULL dark side of the rainbow DEMOnstration

Hand Synced - No movie dialog like "Dark Side of Oz"

There is a radical difference between the traditional hand synced 1995 version of "The Dark Side of The Rainbow" and my highly edited 2021 "The Dark Side of Oz". The difference lies in the fact that, unlike the original DSOTR version my DSOOZ includes all of the dialog and special effects from the film embedded into the complete audio scores of Pink Floyd's "Dark Side of The Moon" and are available for viewing only at my yearly live class screenings!

Because it takes 2 1/2 repetitions of DSOTM to equal the length of "The Wizard of Oz" it wasn't long before I began to look for other ways that I could vary the grand sync, while still maintaining all of the original synchronistic cues (now well over 100+). It was while I was engineering at The Mystic Theatre that I had the opportunity to work with the reggae band The Easy Star All Star's where I discovered their new album "Dub Side of The Moon." The band knew of the urban legend sync and had timed their album to match! This unlocked another element of the puzzle... variation on a theme and even exposed new characters like The Reggae Lion!

I realized that I now had a show on my hands and that it required more staging and preparations to keep it interesting and get it moving forward. It was largely because of staging, concept and copyright concerns, that I adapted some new characters and precautions to protect myself and my DSoOZ performances.

I never charge for the class screening and make no profit what so ever. It is a major calling card for me.

I perform & teach as a Fake Professor with a D.O.P.E. degree so it is considered an educational experience.